In 1805, the NH State Legislature authorized Towns to divide into school districts for educating its children. Wakefield had already begun doing this as education was important to our early settlers. This importance may have been promoted by the first two ministers in Town; Rev. Asa Piper, a graduate of Harvard and Rev. Nathaniel  Barker, a graduate of Dartmouth.

Wakefield ultimately had 12 school districts. District 8 was known as the Dow District. The original  District 8 school building closed in 1906 when the present “East Wakefield School” was built and opened. The original Dow School, located about a mile closer to Wakefield Corner, was used as a cottage for many years. It was demolished in 2017. The East Wakefield School, a one room schoolhouse, was used continuously until 1941 when it was closed due to a dwindling student population. It opened again in 1953 with as many as eight grades being taught at one time. As years passed, there were more students living in that area of town and the 7th & 8th grades were bussed to the Grammar School in Sanbornville. In 1966, when the school closed, there was only one other operating one room schoolhouse in NH. At that time all East Wakefield students went to the Paul School in Sanbornville.

The Town took over the building and rented it out to various organizations: Hill Community House serving as a community center for East Wakefield for many years, a karate center and finally a church group. In 2017, without tenant prospects, the Town was considering selling the building. The Heritage Commission asked to see the building before they made a decision. We were excited to see that although a lot of work was needed, the building was in near original condition. We approached the Board of Selectmen and requested they not sell but turn it over to us. Our plan was to restore and to exhibit our many school artifacts. After discussion, they agreed requiring no money from the Town could be used for this. Of course, we agreed and thus began another project!

Since that time, many hours have been spent restoring the one room schoolhouse. We are fortunate that there are past students that attended the school who are still available to help us with accuracy in some details. We have received a wealth of interesting artifacts and photos from the school years. In addition, we have exhibits dedicated to the history of all 12 Wakefield school districts.

Of particular note is the bell from the bell tower of the Grammar School and the hand bell used for over 40 years at the Primary School. Surprisingly, the original bell in this school building still remains operational.

Open to the Public Wednesdays and Saturdays from 10am–12pm.

In 1876 the existing building was rebuilt. In recent years, the Wakefield Heritage Commission has restored the Meeting House and it is now open for use as a wedding and religious service venue and meeting place. 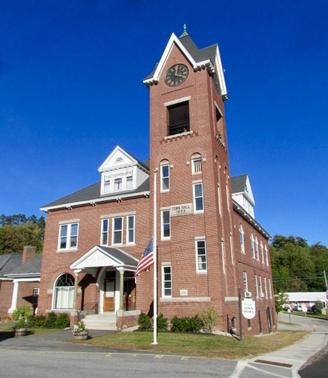 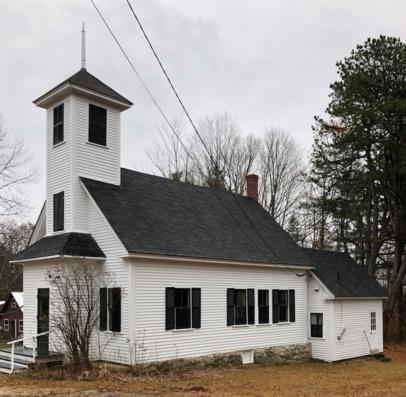 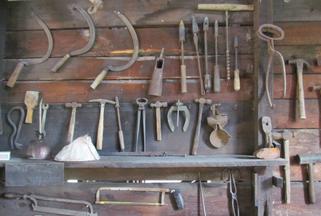 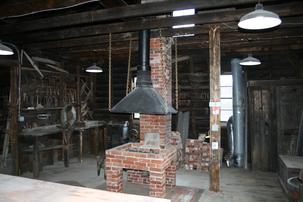 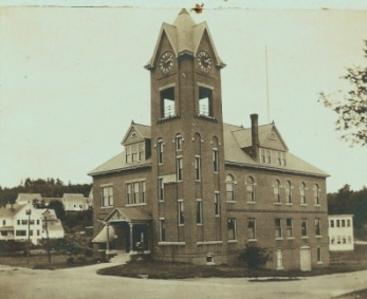 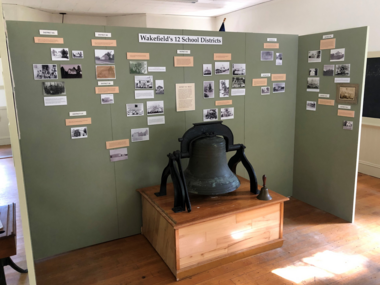 In 2012, John and Diane Gray donated the Blacksmith Shop, one of two shops located in Union, to the Town of Wakefield. The shop was built circa 1848 and was in use until around 1950. The last smithy to work at this shop was Sam Runnells. Restorations to both the interior and exterior began, with the Wakefield Heritage Commission overseeing the upgrades. Over the past few years, the roof has been replaced, the shop has been electrified, and the forge and chimney have been reconstructed to match the historically accurate design used in the late 19th and early 20th centuries.  The shop includes many original tools and supplies, including the original work bench from the blacksmith shop that was located in Sanbornville.  The Commission hopes to have demonstrations with a working smithy --

The beautifully restored Spinney Meeting House is available for weddings and meetings by appointment. To arrange a tour, or for more information, contact the Wakefield Heritage Commission chair Pam Wiggin at 603-387-3698 or email whchairman@gmail.com 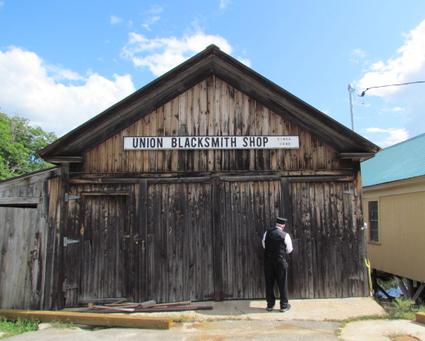 The original station was built approximately in 1854 and replaced by a new station in 1911. This station served as a passenger embarkation and debarkation point for local people, and for many years housed the Union Post Office. Today, Union Station houses numerous artifacts, photographs and antiques related to the region's manufacturing, ice harvesting and railroading heritage.

(Pictured left) WHC Docent Shawn Perry demonstrates some of the blacksmith tools -- and how they were used -- during Wakefield Heritage Day 7/28/2018. The Blacksmith Shop houses an authentic array of tools and artifacts from the blacksmith trade -- including restored, working forge. 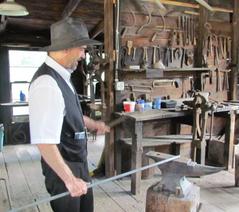 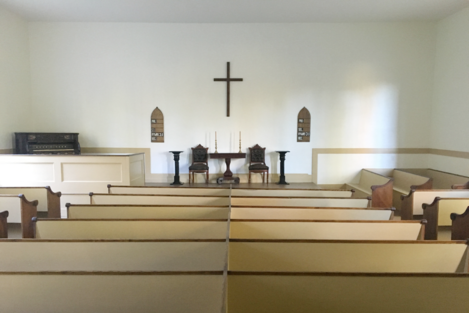 The Wakefield Town Hall and Opera House was originally built in 1895 at a total cost of the town of $7,000. Of course, the project had many benefactors and volunteers who contributed time, money and materials well over that amount. John Sanborn of the Boston and Maine Railroad was among the project's key benefactors. Sanbornville was named in his honor in March 1895. Today, thanks to taxpayers' support, donations, grants and the tireless work of volunteers and members of the nonprofit group, Wakefield Projects, Inc., the Opera House has been renovated to accommodate theatrical and musical productions as well as public meetings. 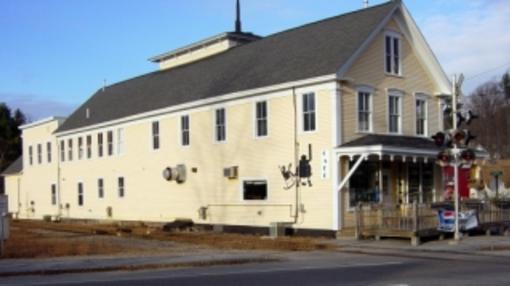 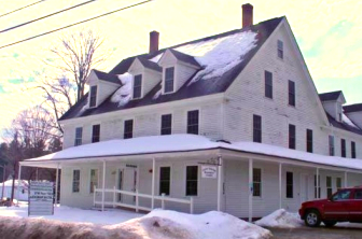 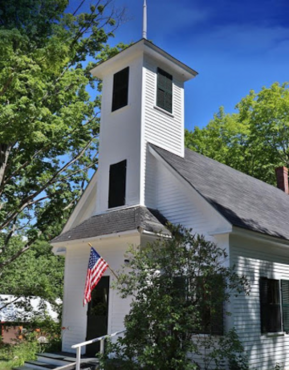 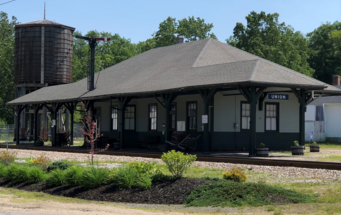 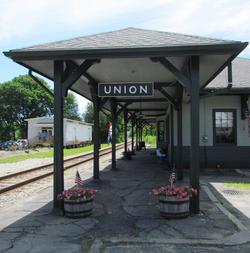 In 1831, a small group of people in South Wakefield met and began a "Free Will Baptist Movement." This group included Jacob Wiggin and Isaiah Wiggin. The land for this building was purchased for $8 and soon a church was built. The Rev. Joseph Spinney became pastor and served as Baptist minister from 1836 until 1854 when he became a zealous Adventist. Thirty members followed Elder Spinney into the new ministry, new by-laws were written and signers included Joseph and Luther Wiggin. Now Baptists and Adventists used the church alternately. 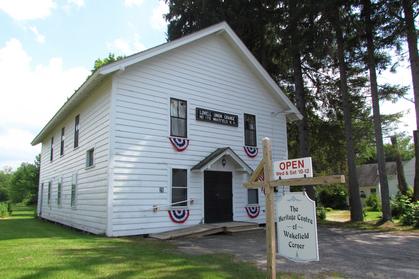 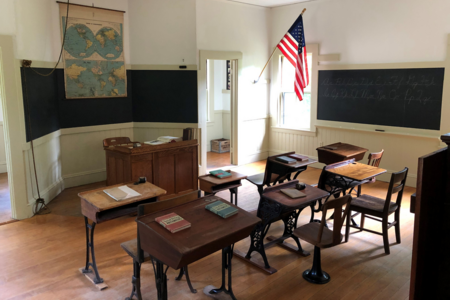 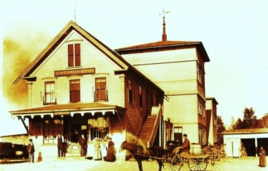 ​The Eastern Railroad reached Wakefield in 1871, the year the J.W. Garvin Store opened.  As business grew, so did the building. The varied roofline is proof. You could buy eggs, thread, kerosene, boots, molasses, flour and more. Further, it served as the first railroad station, a post office, a lodge hall, a barber shop and a town clerk's office. The first issues of the Carroll County Independent were printed here. The store was the "Hub" of a very active railroad center. The building was the first large restoration project of the Wakefield Heritage Commission. Visitors and residents alike recognize the Garvin Building today as the location for Lino's Restaurant and a number of local businesses and offices. 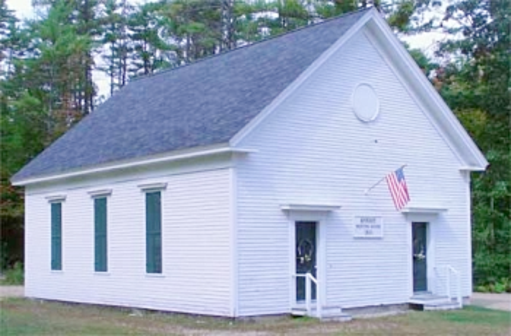 The Grange was charted with 23 members on March 11, 1892. They struggled with membership, met at various locations and in January, 1904, established a building fund with $30. On September 10, 1907 the present lot was deeded by George F. Piper for $1.00. The building was completed and dedicated on January 31, 1918. The Grange was very active and served as a center for social activities for most of the 20th century. With changes from family farming, the Grange membership diminished and in June 2006, the organization deeded the property (again for $1.00) to the Wakefield Heritage Commission, which currently uses the building as a museum preserving the Grange heritage,  the Stage Stop museum, office and meeting space.

The Union Hotel is a well preserved 19th century hotel, erected and operated in the railroad era of the mid to late 19th century and early 20th century. The Union Hotel was built for Robert H. Pike, near the Union railroad station, in 1855, soon after the arrival of the Eastern Railroad. The Union Hotel was one of three hotels built to serve the traveling public. Only two survived and the Union Hotel is the best preserved and most interesting. The hotel remained in use until 1939. In June of 1966 the building was purchased by the Burroughs-Drew Post of the V.F.W. until the sale to the Town of Wakefield. It is now serviced by the Greater Wakefield Resource Center for community programs and is available for rent.