Workers remove one of the wall sections. 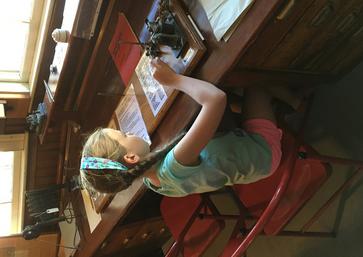 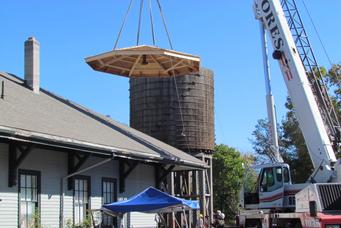 The water tower was donated by the Lake Shore Park Club in Gilford, NH 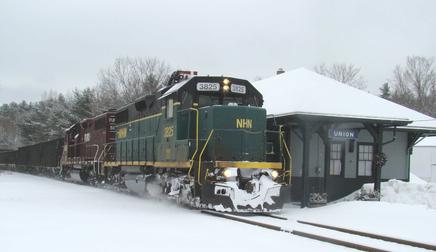 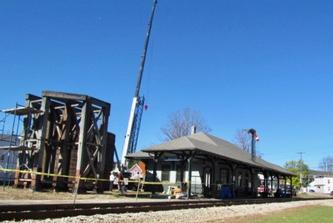 The newly constructed roof is moved to the water tower. 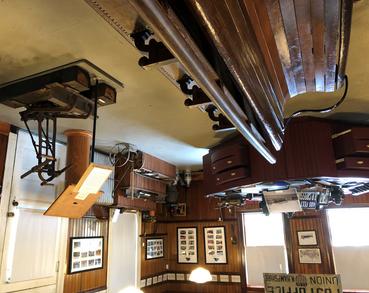 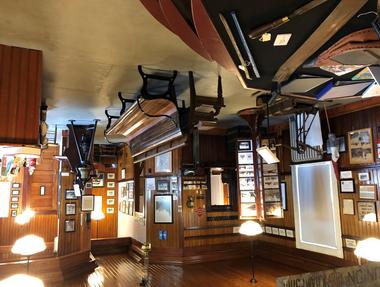 The newly restored antique Boston and Maine Railroad Water Tower, donated to the Wakefield Heritage Commission by the Lake Shore Park Club in Gilford, was hoisted to its refurbished platform just outside Union Station at the Heritage Park Railroad Museum campus Friday, Oct. 20, 2017,

And what an operation it was. Brilliant blue skies and warm temperatures provided ideal work conditions for the enormous crane, equipment and crews from both the general contractor, Target New England of Alton Bay, and the Moore's Crane Rental Company of Dover. Many volunteers and members of the Wakefield Heritage Commission, including chair Pam Wiggin, Phil Twombley, as well as volunteers from the Heritage Park Model Railroad crew, turned out to photograph and videotape the operation.

Jim Doherty, general contractor of Target New England, said the water tower, made of Douglas fir reinforced by iron strapping, weighs 10,000 pounds, with a diameter of 28-feet. When filled, the water tower holds 33,000 gallons, but there are no plans to actually fill the tower with water at this time. The original tank flooring was replaced with new wood, but the rest of the tower and platform is original, officials said. The cedar-shingled, 1,000-pound roof, is newly built, however.

The original tower was dismantled at Lake Shore Park then transported to Heritage Park in June 2016. Target New England began restoring the tower and platform in August 2017. Work began from the bottom up, according to Doherty, with construction of the concrete footings followed by the installation of the platform. The wood on the water barrel is original, as is most of the iron strapping, some of which required replacing or repair.

A highlight of the day was watching the 75-ton crane, with its capacity to reach 86-feet, slowly lift the water tower onto the platform with crews both on the ground and at the platform making adjustments and coordinating the operation. The new roof, built with an octagonal rim, was then lifted onto the water barrel; however, the fit was off and some adjustments will need to be made before it is permanently affixed and topped with a finial, officials said.

Overall, this new, authentic exhibit complements the existing historic, artifacts that preserve the region's history of railroading. The Freight House features the H/O scale, historically accurate model of the Boston and Maine Railroad as it served the villages of Wakefield in 1909. Union Station has numerous exhibits commemorating the region's railroading, ice harvesting, milling and manufacturing history.

"It's another part of the history of the Boston and Maine Railroad, another exhibit. The more historical equipment we can get here, the better we can represent Boston and Maine Railroading since 1900," said Twombley, adding there is some room to add 'rolling stock' like rail cars or a Pullman car, as there is 100-feet of track behind Union Station on which to display such items. Out front, the New Hampshire Northcoast [NHN] Corporation railroad still utilizes the tracks daily, hauling hundreds of tons of salt and sand from Ossipee to Rochester and Boston, Mass.

"Railroad enthusiasts I have talked to have said this will bring more visitation to Heritage Park," she added, "because it is so unusual."

"It's an icon for a railroad," said Wiggin. 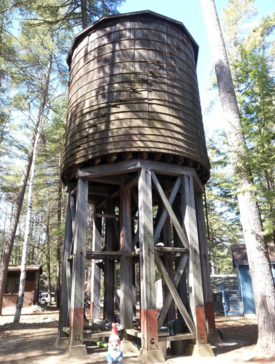 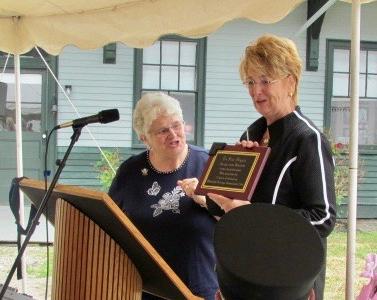 SOME "BEFORE" IMAGES FROM TOWER DISASSEMBLY IN GILFORD, NH

John Thayer produced this fabulous video of Heritage Park.  It is an inviting introduction for visitors! Thanks, John!

This photo shows all the supports necessary to safely remove the tank walls. Each wall section has 21 staves and is 8'6" wide & 18' high. 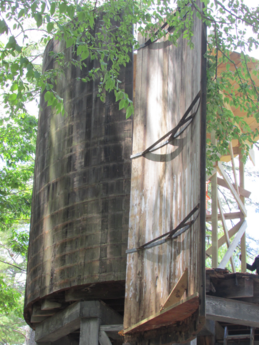 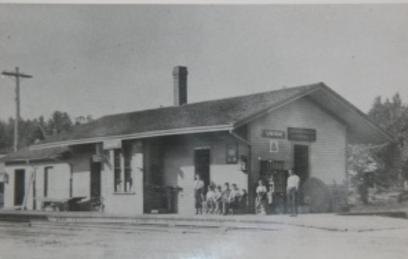 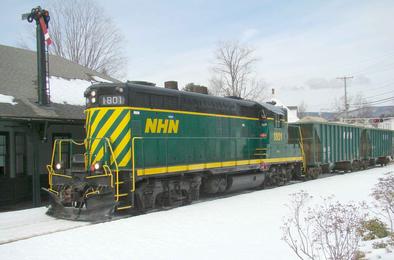 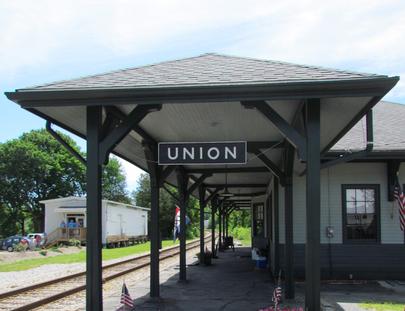 Scroll down for a video tour of the Heritage Park Railroad Museum.

Heritage Park in Union is home to the Wakefield Heritage Commission. The 1912 Union Train Station, freight house, and blacksmith shop on Chapel Street (within walking distance of the station) are all owned and maintained by the Wakefield Heritage Commission. Displays currently include an original wood Bangor and Aroostook snowplow last used by the Wolfeboro Railroad, authentic caboose, ice cutting tools, railroad tools, a 1909 Boston and Maine Railroad model layout of the villages of Wakefield, and much more.

Using the proceeds from the sale of the Garvin Building, the Wakefield Heritage Commission purchased the Boston and Maine Railroad Station, and the adjacent Freight House property in Union when it became available in 2006. The new buildings provided much-needed space to house and display the Heritage Commission's artifacts that had been previously stored in the Garvin Building.

Again, with the help of volunteers and donors, the Union Station was restored and now houses a museum of historic artifacts in the Station’s Waiting Room and Station Master’s Office. The train order boards have been reinstalled and are fully functional. The building has been restored to original appearance both inside and out. Heritage Park has become a reality.

Presently on display is a 1902 Russell Snow Plow on permanent loan. The Wakefield Heritage Commission has rehabilitated the Snow Plow and it is open to the public during the season. Many Boston and Maine Railroad artifacts and photos are on display throughout the station and freight house. The Freight House is now home to the Heritage Park Railroad Museum.

In addition to providing information on the area, the Museum will house exhibits that document local history. Educational programs for all ages will be available.

The highlight of the Freight House restoration is an HO scale model replica of the 1909 era of the Boston & Maine Railroad. The replica will include buildings found along the train route through the villages of Union, Sanbornville, Wakefield Corner, East Wakefield (Burleyville Station), and North Wakefield (Mathews Station). You will follow the tracks of a state-of-the-art HO scale model railroad, depicting the Boston and Maine in 1909. Replica steam engines, freight cars, and passenger cars pass through the countryside where trackside and village structures reflect local early 20th-century life. The history of railroading comes alive at Heritage Park.

The history of railroading comes alive at Heritage Park. 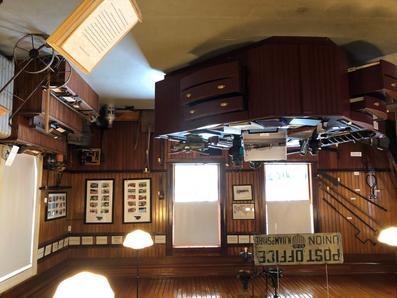 The water tower was hoisted from ground level onto the platform. 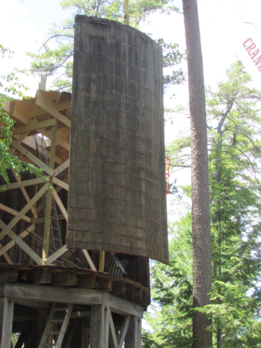 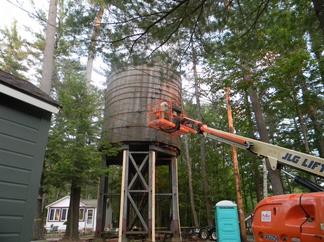 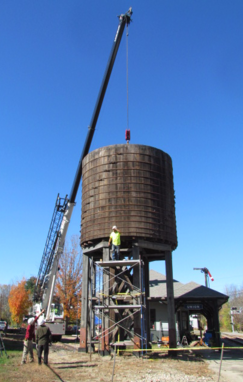 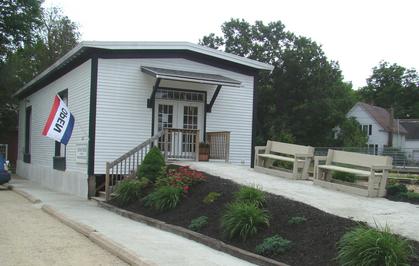 Workers remove the rings on the exterior of the tower. 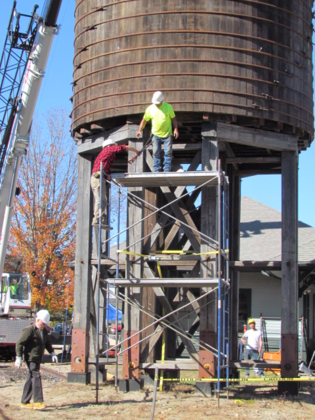 The staging area at Union Station.