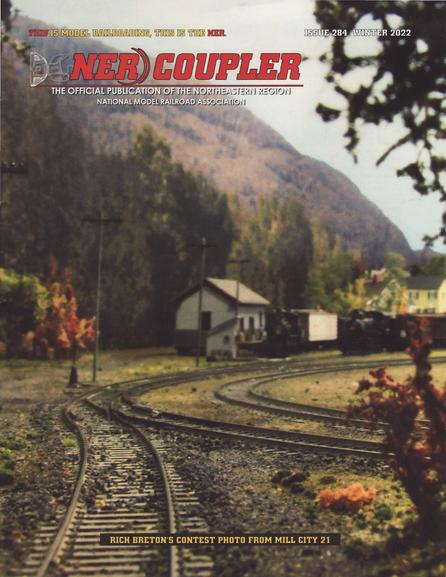 The Wakefield Heritage Commission would like to Congratulate Rich Breton for his contest photo from the Mill City 21 NER Convention being featured on the cover of the Winter 2022 issue of the NER Coupler magazine.
The photo features the Sanbornville Freight House and surrounding area as it appears on the 1909 era Boston and Maine model railroad located in the 1875 restored freight house at the Heritage Park Railroad Museum in Union.

The Wakefield Heritage Commission wrote a grant which was accepted by the NH Division of Historical Resources to place the Union Railroad Station on the National Register of Historic Places. They chose Mae Williams, architectural historian, preservation consultant and owner of Unlocking History as the consultant. The Commission was notified today, January 19, that the National Park Service nomination was successful.

NOTE: Images from the Union Railroad Station and Freight Shed in Wakefield are available for print and broadcast.

The New Hampshire Division of Historical Resources has announced that the Union Railroad Station and Freight Shed in Wakefield have been honored by the United States Secretary of the Interior with placement in the National Register of Historic Places for their contributions to transportation and commerce history as well as for their architectural distinction.

Located in Wakefield’s Union Village, Union Railroad Station was built in 1911 and is an excellent example of a typical early-20th century Boston & Maine railroad station.

A single story wood-frame building that incorporates characteristics of several late Victorian architectural styles, the station’s low-pitched roof and track side eaves project well beyond the building, providing outside shelter from the elements. A three-sided bay window, located on the building’s track side and projecting from the ticket office, allowed station workers to have an unobstructed view of the arriving and departing trains.

The station’s interior was converted to a single-family residence and television repair shop after the Boston & Maine Railroad decommissioned the building in 1956.

The Wakefield Heritage Commission purchased the property in 2006 as part of its effort to create Wakefield Heritage Park. Using original plans located at the Boston & Maine Railroad archives to guide preservation efforts, the Heritage Commission returned the building’s layout closely to its original construction: a large waiting room and restored ticket office, a small restroom where baggage was originally stored and a museum display area at the location of the former men’s and women’s restrooms.

The station’s original vertical beadboard walls and ceilings in the waiting room, still covered in varnish or shellac, were discovered underneath gypsum board that had been installed when the building was a residence. A decorative band around the outside interior walls creates a wainscot. Original interior finishes, including the interior doors and beaded boards, are typical of both public and domestic interiors of the turn of the twentieth-century.

The ticket office’s square ticket window is above an elevated counter, with a long built-in telegraph counter within the bay window.

Built circa 1875, the Freight Shed is located across from the site of the original passenger station, which was built in 1854. A single-story building with minimal architectural details, the shed has two large elevated cargo bays that allow for the easy transfer of goods from wagons to the building’s interior; corresponding openings on the track side allowed goods to be easily loaded onto trains.

The Wakefield Heritage Commission acquired and moved additional railroad-era features to the site to enhance the Wakefield Heritage Park Museum experience. They include the Russell Snow Plow (1902), Boston & Maine Railroad Caboose (1921), a water tower originally constructed in Alton Bay (1888) and a cobbler’s shop (1850).

In the first decades of the 20th century, when rail travel in the region peaked, there were five passenger stations in Wakefield. Only one besides Union Station remains: the 1909 East Wakefield/Burleyville No. 215 Station, which is now a private residence.

Administered by the National Park Service, which is part of the U.S. Department of the Interior, the National Register of Historic Places is the nation’s official list of historic resources worthy of preservation and is part of a national program to coordinate and support public and private efforts to identify, evaluate and protect our historic and archaeological resources.

Listing to the National Register does not impose any new or additional restrictions or limitations on the use of private or non-federal properties. Listings identify historically significant properties and can serve as educational tools and increase heritage tourism opportunities. The rehabilitation of National Register-listed commercial or industrial buildings may qualify for certain federal tax provisions.

In New Hampshire, listing to the National Register makes applicable property owners eligible for grants such as the Land and Community Heritage Investment Program or LCHIP (lchip.org) and the Conservation License Plate Program (nh.gov/nhdhr/grants/moose).

For more information on the National Register program in New Hampshire, please visit nh.gov/nhdhr or contact the Division of Historical Resources at 603-271-3583.

New Hampshire's Division of Historical Resources, the State Historic Preservation Office, was established in 1974 and is part of the N.H. Department of Natural and Cultural Resources. NHDHR’s mission is to preserve and celebrate New Hampshire’s irreplaceable historic resources through programs and services that provide education, stewardship, and protection. For more information, visit us online at nh.gov/nhdhr or by calling 603-271-3483.​